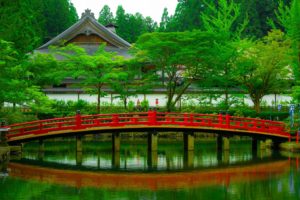 I am excited to start the new year with a guest post from one of my favorite authors: Michelle DeRusha. Thanks for being here today Michelle with these insightful words to begin this first step into 2019.

Two years ago on a warm June morning, my husband, our two boys, and I met Marsha, a volunteer guide, just inside the front gate of the Portland Japanese Garden.

As we followed Marsha across petite wooden bridges, along with pea gravel paths, and overstepping stones set into spongy moss, the garden seemed to wrap us in a shawl of quiet. We spoke in whispers as we strolled, a lullaby of flowing water melding with the rhythmic crunch of gravel beneath our shoes.

Our guide paused beside a large Japanese maple poised regal and elegant like a grand dame on a small, moss-covered hill. Its delicate chartreuse leaves fanned like antique lace over an elaborate network of dark limbs and branches spreading like veins beneath the canopy.

Marsha explained that a particular Japanese gardening technique called “open center pruning” was responsible not only for the sculptural appeal of this maple but also for the uncluttered space and serenity in the garden as a whole.

Pruning open enables an individual tree to flourish by removing complicating elements, simplifying the structure, and revealing its essence, Marsha explained. Over time, a tree that is pruned open is turned inside out, so to speak, revealing the beautiful design inherent within it.

Our group continued on with the tour, but I held back, reluctant to leave this one captivating tree. There was something mesmerizing about it – the way its limbs and branches spread like an elaborate scaffolding beneath its intricate canopy of delicate green, the way its roots, gnarled and exposed, gripped the mossy hill. I yearned to lean my body against its twisting trunk, to soak up the wisdom I sensed coursing deep within it.

Eventually, I ran to catch up with my family, but even after the tour had ended, I found myself still thinking about that one tree. In the months that followed our visit, I thought a lot about the practice of pruning open, and I’ve since come to understand it as a beautiful metaphor – one we can look to for guidance in our own lives and along our own spiritual journeys.

The practice of pruning open is not an easy one. In both gardening and in life, it’s a skill that takes discipline, insight, and years of trial and error, and in many ways, it goes against the grain.

Pruning may not be a popular practice, at least according to what our bigger-better-faster-more society values, but it is an essential one, not only for trees but also for ourselves and particularly for our souls. It is only in moving toward smaller and less – in cutting back in order to open up – that we uncover who we are at the very center of our God-created selves.

Thanks, Michelle for these thought-provoking words. What will you be pruning in the coming year?

BIO: A Massachusetts native, Michelle DeRusha moved to Nebraska in 2001, where she discovered the Great Plains, grasshoppers the size of chickens … and God. She’s the wife of an English professor who reads Moby Dick for fun and mom to two teenage boys and the laziest Corgi-beagle in the world. Michelle’s newest book, True You, releasing January 1, guides readers on a journey toward letting go in order to uncover their true God-created selves.

This post is adapted from True You: Letting Go of Your False Self to Uncover the Person God Created, by Michelle DeRusha, releasing January 1 from Baker Books.