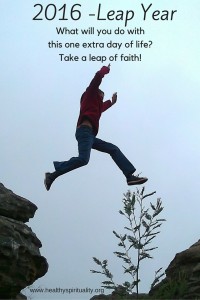 Here are some fun things I learned about leap year:

Write a letter. Renew a friendship. Learn something new. Read something inspirational. Serve someplace.  Spend extra time in prayer, bible reading or your journal. Take a walk and breath in God’s air thanking him for life and an extra day to glorify him.

What will you do to celebrate Leap Year?