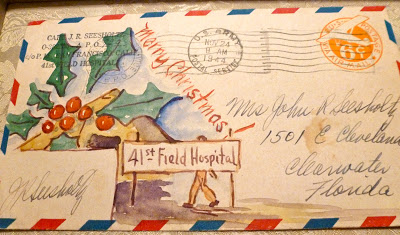 My dad served in WWII, most of the time as a surgeon in a hospital in the Philippians. I cherish the six letters he wrote to my mom that were decorated by a recovering patient. What I treasure most though is his handwriting.

Perhaps that is why I read in interest a blog last week, Yearning for God, about a month of letters challenge.
A month of letters began in 2012 by writer Mary Robinette Kowal. Her idea is simple – write one letter each day in February. You can read more and sign up on this website.

Her rules are easy:

“1. In the month of February, mail at least one item through the post every day it runs. Write a postcard, a letter, send a picture, or a cutting from a newspaper, or a fabric swatch.

2.  Write back to everyone who writes to you. This can count as one of your mailed items.

3.  All you are committing to is to mail 23 items. Why 23? There are four Sundays and one US holiday. In fact, you might send more than 23 items. You might develop a correspondence that extends beyond the month.

Write love letters, thank you’s, or simply notes to say that you miss an old friend. Let yourself step away from the urgency of modern life and write for an audience of one. You might enjoy going to the mail box again.”

I read about this, then changed my mind.  “Why would I want to do this?

Excuses not to participate reigned down on me. Not enough time. Who would want to hear from me?  23 people? I can’t think of 23 people! The dreaded hand cramps. Postage rates just went up. And on and on…
Then I remembered my dad’s letters. I also have handwritten letters from my great Aunt Anna. From my then future husband Bill when we spent a month apart during college. Notes from my kids when they were first learning to write.  Handwritten recipe cards by my 99 1/2 year old best friend, now cooking in a heavenly kitchen.

I treasure these letters and keepsakes. Reread them tenderly, often with tears. More than words are intimately communicated with handwriting. Scribbled lines of paper that say, “I am thinking of you. You mean something to me. I care.”

Writer Virginia Woolf called letter writing “the humane art, which owes its origins in the love of friends.”

I read that according to a U.S. Postal Service survey, the average household now receives one personal letter roughly every seven weeks — compared to one letter every two weeks in 1987.
Holiday and birthday cards aren’t included in those numbers, though they also are sent less frequently, The Associated Press reports.
The Postal Service, which is facing losses of up to $8 billion this year, points out the obvious: Letter-writing is on the wane because the Internet has become the “preferred method of communication.”
Email is a speedy concise form of communication. I have linked with people all over the world. I also sigh each day reading multitudes of emails and grin with triumph when emptying my inbox. Just not the satisfaction of opening a letter, slowly savoring its script and connecting with another soul.

So I am participating in the Month of Letters challenge.  I have started my list of potential victims … targets… recipients… friends. One of the favorites on the roll is my three-year-old granddaughter.  Perhaps she will keep a few handwritten letters from her “Ammie” and put them in her treasure box. I haven’t completed my list so if you are hungering for something in the mail, email me your address – jeanwise22@gmail.com.

Do you have treasured handwritten keepsakes?