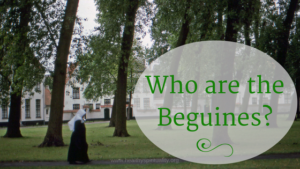 Who are the Beguines?  I didn’t know about these women, collectively called the Beguines, until I began my spiritual direction education 12 years ago.

Just today I had a conversation with a friend and we both shared that our knowledge of strong Christian women from our history is weak.  I told her about the Beguines and just knew I had to feature them on this month’s Tending the Holy Thursdays.

Tending the Holy Thursday highlights for several weeks a spiritual practice or a person(s) of faith, so we can explore the topic with more depth.  For October, we will learn more about who the Beguines were, then dive deeper into several of the women who wrote and whose names we know.

As usual with each month’s theme, I have an additional FREE download for you. I created something different this month: a fun wordsearch using words describing the Beguines. You can get this freebie by clicking on the button at the end of this post.

Who are the Beguines?

I could probably write a book about all their details but think for simplicity sake I will just bullet key points about their lives:

Brief History of the Beguines

Next Thursday we will explore the lives of several of the Beguines and from their stories get a glimpse to the spirituality of these fascinating group of women from the middle ages.

Don’t forget to download your free wordsearch about the Beguines by clicking on the button below.  I would appreciate you sharing this post with others and inviting more to visit Healthy Spirituality. We are building a great community here. Thank you!

Had you ever heard of the Beguines before? What do you think?