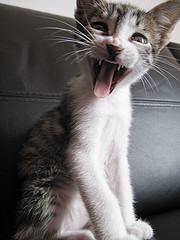 Flickr Creative Commons
My kids think I am crazy. In fact my son-in law Austin nicknamed me “Crazy” when he was dating my daughter. And foolishly he still married her knowing daughters tend to take after their mother.
I do crazy things as a mother.

3 AM  – March 1986 – I dragged my kids from their cozy beds, bundled them up warmly and my husband and I drove 20 minutes to the Bryan airport.
We weren’t the only crazy ones up that night to look through professional telescopes to glimpse at a once in a lifetime view of Halley’s Comet.

Visible from earth every 75-76 years, this heavenly gift would not reappear until 2061. Halley is the only short-period comet that is clearly visible to the naked eye from Earth.
If you are lucky you may see it twice in your life. Lucky enough to have a crazy mother to drag you out of bed in the cold early spring morning to peer through a telescope to see a fuzzy cotton ball image zooming across the sky.

Three planets in perfect alignment next to the crescent moon lights up the sky. Jupiter and Venus are so bright, they even shine through the city lights. You have to look a little harder for the red planet of Mars higher but sill in perfect formation – an exact straight line.

Amazingly Jupiter and Venus will slowly draw even closer together in the night sky over the next few nights. By late February, the two planets will creep within 10 degrees of each other in the sky; close enough that you can block them with a closed fist held out at arm’s length. On March 12 and 13, Venus and Jupiter will be so close, they can be covered by just your fingertips, according to a NASA.
Guess how my kids reacted?  Yep, they all went outside and looked up. One by one I heard from them.
Valerie wrote, “Very nice. Thanks for letting me know.  You and your stars.”
Katie and Austin called. My husband had to explain to them where to find Mars. They looked a second time and found the red planet hiding behind tree limbs.
Sadly the heaven performance was not visible in Chicago as its bright city lights drowned out the view for Brian and Mandy to enjoy.
Until last night.
The phone rings. Brian and Mandy were leaving church. With less lights in the parking lot, they looked up and saw the starry display. They excitedly called their crazy mother to let her know they saw the planets and were amazed how large they appeared.
Call me crazy.
Crazy for teaching my kids to look up.  The very act of raising our heads and looking skyward lifts the spirit and connects a family.
Crazy for teaching my kids to look beyond what is right in front of you and know moreMore exists. Seeing further than your own little world brings hope and faith.
Crazy for showing them how wonderfully creative God is. God who delights in creating starry shows and aligning even the planets in perfect formation to entertain us, mere humans. G0d who throws in a once in a lifetime comet performance, then dares some of us to see it twice. God who is powerful enough to order planets and comets and human hearts to line up with and for Him.
Call me crazy. One crazy mom who taught her kids to look up, look beyond, and look for God.
And look out – I have grandchildren now.