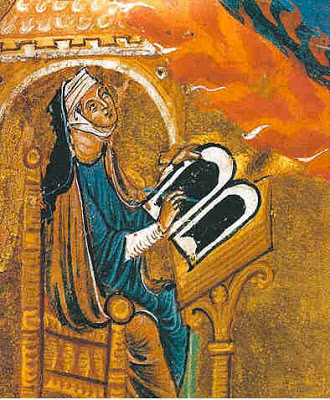 A few months ago I surveyed many of you to help me select a woman of faith to study. The winner was Hildegard of Bingen. I was excited to read about her again and was surprised by a few comments that some have never heard of her.
September 17 is Hildegard of Bingen’s commemoration day so I think this would be a good time for a short bio about her and some interesting links.
Hildegard of Bingen was born in 1098. The tenth child of a noble family, she was dedicated at birth to the church as was the custom of the day.
At age eight she was sent to live with Jutta, an anchoress, so she could get her religious education. An anchoress is like a religious recluse who spent most of her days in prayer in her tiny private cell.
When Jutta died years later, Hildegard became prioress of the Benedictine convent.
Famous for her “illuminating” visions and spiritual wisdom, Hildegard wrote nearly 400 bold and feisty letters to bishops and kings, books about medicine and nature, music, and plays; she also undertook several preaching tours and called for church reform. Quite a feat for any woman, let alone in the 12th century!
Her most famous writing is “Scivias” or Know the Ways of the Lord. It is a visionary guide to Christian doctrine covering everything from creation to marriage and is written not in ordinary language but in extraordinary images.
Hildegard wrote and spoke extensively about social justice, about freeing the downtrodden, about the duty of seeing to it that every human being, made in the image of God, has the opportunity to develop and use the talents that God has given him, and to realize his God-given potential. This strikes a chord today.
I found this presentation by June Boyce Tillman about Hildegard where for part of her talk she tells her story in first person. It is a great performance and worth you time to watch if you want to learn more about this fascinating woman. You will get a real sense of the spunk, personality and faith of this saint.
Fordham University has a wonderful overview of her life. You can read Hildegard’s bio here.
My favorite quote from Hildegard is this:
Thus am I, a feather on the breath of God.
God calls each of us to be His feather – responding to where He calls us. To be responsive to His nudges. To be open to His grace.
I want to live as a feather. Not burdened down with the heavy concerns of my heart, but focused, surrendered, dependent entirely on God for every moment. Ah, to be a feather. What a lovely image this is.
What do you think of Hildegard?
What woman in Christian history resonates with you?