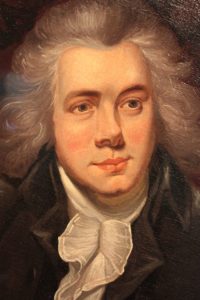 I knew his name, but not his story until I watched the movie, Amazing Grace. This movie tells about John Newton’s life, the former slave boat captain who after he converted to Christianity wrote the lyrics to one of the most favorite hymns of all time, Amazing Grace. But I didn’t know how Newton became Wilberforce’s spiritual director guiding him to serve as God called him to do. The movie is actually the story of William Wilberforce and how he, as a member of Parliament, abolished the stave trade in England.

Today is William Wilberforce Day, honoring him on his birthday, but more so, for dedicating his life to doing what is right and serving God.

Who was William Wilberforce?

Wilberforce was born on August 24, 1759 into a wealthy, high society family in England. He studied at Cambridge where he developed a close friendship with William Pitt, the future prime minister.

The slave trade boomed in the 1700’s with as many as 35,000 and 50,000 Africans a year captured, shipped across the Atlantic, and sold into slavery. It grew as a profitable business, making many powerful men very rich.

Shortly after his college experience Wilberforce was elected to Parliament where for the first four years didn’t do much there.

In 1785, Wilberforce committed his life to Christ and began to sincerely discern how to live as a Christian. He sought out the minister who he heard when he was younger, John Newton. Newton encouraged him to lead a religious life, but also he encouraged Wilberforce to stay in politics and work for social reform.

“If to be feelingly alive to the sufferings of my fellow-creatures is to be a fanatic, I am one of the most incurable fanatics ever permitted to be at large.”
– William Wilberforce

In 1789 Wilberforce argued passionately in the House of Commons that slavery was a matter of “great injustice and contrary to principles of human dignity.”

“I mean not to accuse any one, but to take the shame upon myself, in common, indeed, with the whole parliament of Great Britain, for having suffered this horrid trade to be carried on under their authority. We are all guilty—we ought all to plead guilty, and not to exculpate ourselves by throwing the blame on others..”

Though he had some sympathetic support, the opposition was fierce and his bill was defeated 163 votes to 88.

Often he would present as many as 12 resolutions against the slave trade each year.

Note some years are skipped due to pressing international politics, personal sickness and just plain political fear and timing.

Wilberforce persisted. He became the target of the pro-slavery forces and subjected to public criticism, lies, and smears.

Wilberforce finally introduced a bill to approach this controversial issue in a new way. Instead of focusing on making the slave trade illegal, the bill made it illegal for ships to aid the French slave trade. The bill passed before the opposition realized that this action basically ended 75% of the slave trading business for England.

Finally, in 1807 the Slave Trade Act was passed. This bill made it illegal to trade in slave but did not free the slaves in the British Empire. More work had to be done.

Year after year Wilberforce persevered. By 1825, his health declining, he left politics but continued to advocate for the cause that stirred his heart with so much passion.

The Slavery Abolition Bill, freeing all slaves in the British Empire passed Parliament in 1833, just three days before Wilberforce died.

Wilberforce spent his lifetime fighting injustice. Though he is best known with the slave trade issue, he also fought for prison reform, education, issues of public health, ending of child labor and was one of the founders of the Royal Society for the Prevention of Cruelty to Animals.

What an inspirational life!

Many of these quotes are as pertinent today as in the 1800s.

“Of all things, guard against neglecting God in the secret place of prayer.”

“Let everyone regulate his conduct . . . by the golden rule of doing to others as in similar circumstances we would have them do to us, and the path of duty will be clear before him.”

“Life as we know it, with all its ups and downs, will soon be over. We all will give an accounting to God of how we have lived.”

“Surely the principles of Christianity lead to action as well as meditation.”

“If you love someone who is ruining his or her life because of faulty thinking, and you don’t do anything about it because you are afraid of what others might think, it would seem that rather than being loving, you are in fact being heartless.”

“The objects of the present life fill the human eye with a false magnification because of their immediacy.”

“I am disturbed when I see the majority of so-called Christians having such little understanding of the real nature of the faith they profess. Faith is a subject of such importance that we should not ignore it because of the distractions or the hectic pace of our lives.”

“A private faith that does not act in the face of oppression is no faith at all.”

“There are four things that we ought to do with the Word of God – admit it as the Word of God, commit it to our hearts and minds, submit to it, and transmit it to the world.”

“There is no shortcut to holiness; it must be the business of our whole lives.”

“Let it not be said that I was silent when they needed me.”

“May God enable me to have a single eye and a simple heart, desiring to please God, to do good to my fellow creatures, and testify my gratitude to my adorable Redeemer.”

“Lovely flowers are the smiles of God’s goodness.”

“I would suggest that faith is everyone’s business. The advance or decline of faith is so intimately connected to the welfare of a society that it should be of particular interest to a politician.”

As you read about William Wilberforce, what lessons bubbled up for you?