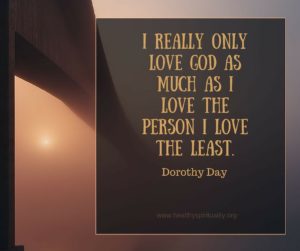 Dorothy Day has been my companion for more than 10 years now.  I always learn something from her.  Her social justice beliefs and how she lived every day following the Sermon on the Mount yanks me from my comfort zone and makes me question if I do enough, speak up enough, give enough. She inspires me to seek God and follow him in deeper ways.

For May’s Tending the Holy Thursday theme where I delve into a topic or a person of faith for several weeks, we are going to look at Dorothy Day. Today I will share some of her background, next week will be rich with her wonderful, challenging quotes to consider, then the last week we can discuss what her life means to us today.

I created a free Reflection Guide for you to download by just clicking the button at the end of this post. I think this guide would be great to copy and keep in your journal for further contemplation. It has several quotes divided by topics, followed by a writing/reflection prompts and questions with space to write.   I hope it blesses your journey with Dorothy.

Who was Dorothy Day?

How I “Met” Dorothy Day

I wrinkled my nose and shook my head in disbelief as I read the life of Dorothy Day. This is going to be a very long two years studying the life of this woman so different from me. Maybe I should switch to another inspirational spiritual person.

In the first year of my two-year program to learn to be a spiritual director, each of us chose someone from history to be our spiritual mentor. We studied their lives. Read books about them. Gave presentations about how they discerned God in their moments and how walking with someone of faith changed our own spiritual journey.

My instructor suggested Dorothy Day to me. I recently found information about my great Aunt Anna whose life paralleled Dorothy’s, so at first she sounded like a good idea. But as I learned more about Dorothy’s early life – she was nothing like me. Please let me switch to someone else.

I read about her life as young writer/journalist, living the bohemian wild life of the 1920s – with drinking, smoking, hanging out with anarchists, Socialists, and Communists. She got pregnant and had an abortion. She walked in protests with women suffragists and was arrested. She later lived with another man and had daughter out of wedlock.  Why am I spending time with this person?

Have you ever read the Hound of Heaven? The poem describes how God continual searches for us throughout our lives and wherever we stray.  Dorothy loved this poem and how the Hound of Heaven weaved His love into all the threads of her life. Her family rarely attended church, though she occasionally participated in some practices. She looked back and even in her darkest times, God still loved her and waited for her to return. I began to listen to Dorothy on a new level.

The birth of her daughter changed everything and when she decided to have Tamar baptized, her common law husband left.  Dorothy made the choice – she would live for God.  Mmmm, maybe I could learn something from her.

Always with a heart for social justice, she continued to work for the poor and for peace. She often would speak at large events during the afternoon and spend her evenings serving soup and scrubbing toilets. She lived a life of voluntary poverty.  Her humility and deep commitment to follow Jesus’ teaching touched my heart.

Dorothy followed Jesus by taking to heart the message in the Sermon on the Mount. She served others in poverty and loved the poor, rejected, marginalized in life and actually followed what Jesus taught.  She measured her life in how she fed the poor, gave drinks to the thirsty, welcomed the stranger, clothe the naked, cared for the ill and visited those in prison.

Loving your enemy and practicing non-violence are not always popular decisions. Many people disliked her stance for peace during World War II and her later protest against nuclear weapons and marches for civil rights. Yes, even in her later years, she spent brief times in jail for her protesting.  I love her boldness!

What drove this woman’s passion?  Dorothy spent time in daily prayer, worship, fasting, and studying the Bible. In her later life she often went on retreats and encouraged others in this practice. A person of holistic spirituality balances the inner nurturing of the soul with the serving of others, all grounded in Jesus’ words.  Mmmm, I am learning much from this woman and identifying with her journey.

Perhaps the greatest lesson I learned from Dorothy is love. She wrote, “Love is the measure” and “Your love for God is only as great as the love you have for the person you love the least.”

My journey with Dorothy began in 2004 and she now has a special place in my heart. She was fully devoted to God and followed His word with her whole heart, mind, soul and strength. She lived the greatest commandment.

Next week I will share Dorothy’s wisdom in her own words. Again please download the free Dorothy Day Reflection Guide by clicking the button below.  I mentioned a few weeks ago when I shared another resource that I was working on my system so if you already subscribe to Healthy Spirituality you may get a message for you to confirm your subscription, please just ignore that email.  But if you haven’t already subscribed, I would love to have you get my twice a week blog post by email.  I never spam you or bother you much, I promise. Either way, your free download will come quickly after that message to your inbox. I have no idea what I am doing wrong yet with this system, still learning and  techy isn’t not a strength of mine. So sorry for the confusion, please give me grace and little love.  LOL

What do you think of Dorothy Day? What did you learn new about her life?