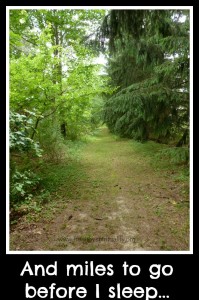 I was a lonely kid in fourth grade. I hid in my imagination and escape to distant planets in the small tree next to the house. Those branches evolved into my space ship taking me on many adventures. Those escapades seeped into my writing assignments for school that year.

I don’t remember my fourth grade teacher’s name. I really should try to find it, but I will always remember her kindness. I think she may have been the first teacher to nurture the writer in me.

On the last day of school as everyone was scurrying out the door for summer vacation, she asked me to stay a minute. She explained she was moving out of state but how much she enjoyed reading my writing and how she hoped I would continue to develop that talent. Then she gave me a book.

A book of Robert Frost poems. I still own that small black volume of poetry, a treasure from my past and a symbol of someone who believed in me.

I love much of Frost’s poetry. One of my favorites and one of many people’s favorites is
“Stopping by Woods on a Snowy Evening” with its classic last line:

The woods are lovely, dark and deep,

But I have promises to keep,

And miles to go before I sleep,

And miles to go before I sleep.

These memories bubbled up this week and filled me with unexpected peace when I heard the story behind this poem.

Frost once told an audience in 1947 that this poem was his favorite. He said “my best bid for being remembered.”

Frost told the story that one December evening he realized he and his wife wouldn’t be able to give Christmas gifts to their children that year. Frost was a farmer and not the most successful one but he looked around, found some produce to take to town to sell for some money.

He didn’t sell anything. Frost told the audience as he traveled home, it began to snow and he was overwhelmed by shame and failure. The horse stopped and Frost sat in the still winter woods and cried. After a few minutes, he regained his composure and headed home.

Several years later Frost’s daughter confirmed that this incidence was the inspiration for the poem and that Frost once told her, “A man has as much right as a woman to a good cry now and again. The snow gave me shelter; the horse understood and gave me the time.”

The longer I live the more I see beauty rising from our brokenness.

Wisdom emerging from vulnerability and uncertainty.

Courage coming from just taking that first step and leaping into the unknown.

And perhaps our best bid for inspiration when we stop and give ourselves time.

We have miles to go before we sleep.

What poem lingers with you?