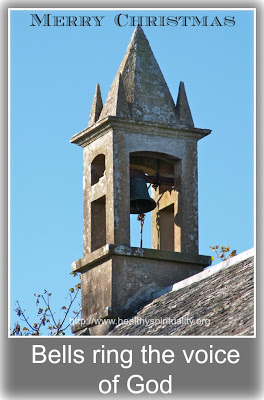 “I heard the bells on Christmas Day, Their old familiar carols play…”

The words linger and the melody sticks in your mind.
I sang these words this morning celebrating Christmas with my family. I woke up with Christmas joy, thanking God for sending us His son. This song has been loitering in my spirit for several weeks.
I know of others who woke up this morning, not to joy, but deep sorrow. Christmas can be a cruel stabbing season following the loss of a loved one, a life threatening illness or the wrong choices made by others.
I hummed this tune of” I Heard the Bells on Christmas Day” a few weeks ago grieving with the rest of the nation for innocent lost lives. I remembered one melancholy verse:
And in despair I bowed my head

‘There is no peace on earth,’ I said,

’For hate is strong and mocks the song

Of peace on earth, good will to men.’

Sounds like this song could have been written during this frightening time of terrorism, but Henry Wadsworth Longfellow, the creator of these haunting words, wrote them during the time of the Civil War.
Like much of life if we only focus only on one tragic incident, one cruel remark, one sad fragment of life – we lose perspective. When I read Longfellow’s entire poem – I see optimism, strength and healing hope.
“I Heard the Bells on Christmas Day” emerged from Longfellow’s grief. Longfellow lost his first wife due to illness. After seven lonely years, a new love, Fanny, entered his life as wife number two. They were blessed with five children.
In 1861, Fanny died after her dress caught fire. Longfellow sustained severe burns on his hands and face from trying to save his wife. He was so badly burned that he could not even attend her funeral.
Then the Civil War erupted, which seemed to Longfellow an additional punishment. He wrote in his journal the first Christmas after Fanny’s death, “How inexpressibly sad are all holidays.”
His journal states:  “I can make no record of these days. Better leave them wrapped in silence. Perhaps someday God will give me peace,” on the anniversary of Fanny’s death. For Christmas, 1862, Longfellow writes: “A merry Christmas’ say the children, but that is no more for me.”
Then in late 1863 Longfellow received word that his eldest son, Lieutenant Charles Longfellow, had been severely wounded and crippled in battle. Longfellow made no journal entry for Christmas, 1863.
Words are powerful tools and writers often delve into texts to express our deepest feelings. Longfellow knew the healing power of words. As he listened to the bells outside his window ring out the news of our Savior’s birth, he knew as long as there would be Christmas; the promise of new life would continue to bloom.

The sound of bells represents the voice of God.

I think God spoke to Longfellow that day as he penned the words of this song. He may have written them to sooth his sorrow, but soon the words and its melody blossomed into a blessing for all of us.

1. I heard the bells on Christmas day

Their old familiar carols play, And wild and sweet the words repeat
Of peace on earth, good will to men.
2. I thought how, as the day had come,
The belfries of all Christendom

Had rolled along the unbroken song

‘For hate is strong and mocks the song

Of peace on earth, good will to men.’

4. Then pealed the bells more loud and deep:

’God is not dead, nor doth He sleep;
The wrong shall fail, the right prevail

With peace on earth, good will to men.’

5. Till ringing, singing on its way

The world revolved from night to day,
A voice, a chime, a chant sublime

Of peace on earth, good will to men.

Longfellow didn’t stop with those sad words buried in the middle of this poem. He heard God’s voice to find deeper meaning of life: “God is not dead, not does he sleep…”
Merry Christmas, dear reader. The bells – the voice of God – peal louder and longer than loneliness, despair and grief. The world eventually revolves from dark to light.
May you all hear God’s words of hope. May you hear the bells on Christmas day and every day.
May the last words of this hymn – Peace of earth, good will to men– bless you.