For the past year as we travel south on State Route 49 from my little town in northwest Ohio, we have been fascinated to watch a massive construction project. Horizon Wind Energy are in the midst of a $1 billion plan to build hundreds of wind turbines in Paulding and Van Wert counties. 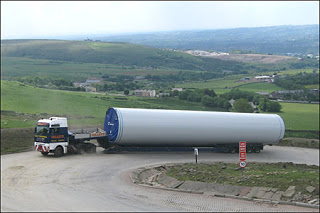 New roads have been built and tons of dirt moved. The site involves more than 5700 acres on both sides of the state highway.
The turbines will be either a 256-foot tower for a total height to the top of the blades of 398 feet, or a 328-foot tower for a total height of 476 feet. Each nacelle or the structure at the top of the turbine, weighs 85 tons.
This project has been going on for years – the forming of the idea, researching the best sites, holding public meetings, arranging financing and that was before any dirt was moved.
When we drove past the site last week we could tell foundations had been laid and a few of the central towers were being raised. We passes trucks delivering enormous white poles and huge larger than can be imagine blades. I read that each foundation uses about 50 truck- loads of concrete and 45 tons of steel rebar.
Takes much patience and foresight to create the infrastructure to build something this big and important.
Thank heavens that God, as Creator and Artist, also has endless patience and wisdom in building our spiritual infrastructure. If it were me, I would have given up on myself a long time ago.
But God keeps molding, and crafting His masterpieces until our spiritual infrastructure is just right. His plans know exactly where, when and how we will turn out. He moves the dirt and pours His love into us creating strong foundations.
I have shared this C. S. Lewis quote in the past, but it fits so well in today’s post:
Imagine yourself as a living house. God comes in to rebuild that house. At first, perhaps, you can understand what He is doing. He is getting the drains right and stopping the leaks in the roof and so on: you knew that those jobs needed doing and so you are not surprised. But presently He starts knocking the house about in a way that hurts abominably and does not seem to make sense. What on earth is He up to? The explanation is that He is building quite a different house from the one you thought of — throwing out a new wing here, putting on an extra floor there, running up towers, making courtyards. You thought you were going to be made into a decent little cottage: but He is building a palace. He intends to come and live in it Himself.
I am certainly grateful God is the One in charge. “Please be Patient – God is not done with me yet.” He is still working on my spiritual infrastructure and that may take a very long time.