Patty Wysong has created a fun meme where once a week bloggers posted on the letter of the week. Check out the details here.   It is called A2Z: Take 2. A2Z as she challenges bloggers to write a post each week going through the alphabet.  Take 2 since this is the second time she has used this meme. Anyone can join in and you don’t have to always participate.
This fun meme has now progressed to the letter O
O = Optimist 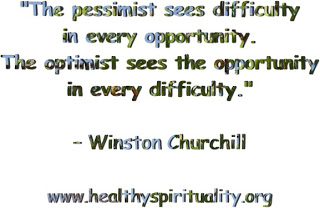 I haven’t always been an optimist. In fact I think I am wired quite the opposite.
But as an adult I decided optimism as a trait appealed to me; thus began my search to develop this characteristic. Uphill battle, let me tell ya!
I collect optimism – quotes, stories and even have given a few presentations about the value of being positive. Being a nurse, I have seen the difference in the healing and recovery of people with optimism as compared to the pessimist state of mind.
With today’s letter of the alphabet being O, I thought I would share a few fun things I have read about this encouraging word:  Optimism comes from the Latin word for best. An optimist expects the best in the world.
I think the best optimist is not just a Polly Anna “everything is rosy” type, but one who also has her feet firmly rooted in the ground.
Here are ten of my favorite quotes about Optimism:
And a funny poem to end with today:
Between the optimist and the pessimist,
the difference is droll.
The optimist sees the doughnut;
the pessimist the hole!
~ Oscar Wilde
Let’s keep our eyes on those doughnuts.  Are you more of an optimist or a pessimist?