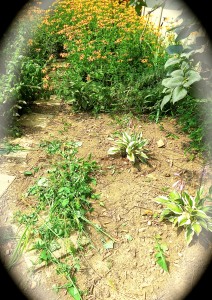 One of the many piles of weeds in my backyard garden

We were only gone six days last week and weeds invaded, besieged my garden.

Not only did they abundantly appear, the weeds grew tall like arrogant, pompous, well you know.

Not only did they multiply like unwelcomed rabbits, the weeds imbedded their gangly roots near the bases of my blooming perennials.

Not only did they grab vital real estate belonging to the cheerful Black Eye Susans, the weeds brought along their buddies, the beetles. No, not John, Paul, George and Ringo to serenade my garden – nasty looking hard shelled black ones delightfully chewing on my roses.

Reminds me of the parable about the sowing of the seeds:

“Listen! A farmer went out to plant some seeds. As he scattered them across his field, some seeds fell on a footpath, and the birds came and ate them.

Other seeds fell on shallow soil with underlying rock. The seeds sprouted quickly because the soil was shallow. But the plants soon wilted under the hot sun, and since they didn’t have deep roots, they died.

Other seeds fell among thorns that grew up and choked out the tender plants.

Still other seeds fell on fertile soil, and they produced a crop that was thirty, sixty, and even a hundred times as much as had been planted!

“The seed that fell on the footpath represents those who hear the message about the Kingdom and don’t understand it. Then the evil one comes and snatches away the seed that was planted in their hearts.

The seed on the rocky soil represents those who hear the message and immediately receive it with joy. But since they don’t have deep roots, they don’t last long. They fall away as soon as they have problems or are persecuted for believing God’s word.

The seed that fell among the thorns represents those who hear God’s word, but all too quickly the message is crowded out by the worries of this life and the lure of wealth, so no fruit is produced.

The seed that fell on good soil represents those who truly hear and understand God’s word and produce a harvest of thirty, sixty, or even a hundred times as much as had been planted!”

As I worked my garden, my heart listened to God’s story once again. How am I allowing the thorns and weeds of the world, “the worries of this life and the lure of wealth”  to all too quickly crowd out God’s message “so no fruit is produced?”

Tough but needed message to ponder.

Time to fix my eyes on Jesus and not the shiny temptations and deceiving detours offered by the evil one. Praying for strength, wisdom and courage to do so.

I believe God talks to us all the time if we just pay attention and nature certainly is one of the Lord’s best teachers.

What has God been quietly telling you lately?