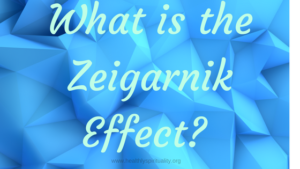 What is the Zeigarnik effect? I never heard this phrase, the Zeigarnik effect, before until a few weeks ago, then suddenly I hear/see it in multiple places. That usually is a sign for me to stop and listen: wisdom is bubbling up to teach me something…

You have experienced the Zeigarnik effect but didn’t know its name. Ever wonder why a story that ends with a cliffhanger lingers in our mind? The infamous “to be continued…” Yep, this mental tension now has a name!

The Zeigarnik effect is how our brain reacts to unfinished tasks by continuing to bring our attention to them. Once we finish, our brain eliminates them.

A Russian psychologist named Bluma Zeigarnik observed, in the 1920s that waiters could remember customers’ orders that were not paid better than those already completed and paid. Her further experiments showed that humans remember the incomplete, the unfinished, more than what is done, thus stimulating us to keep moving forward.

Her experiments asked different groups of people to complete task.  Some were allowed to get things done, while others were interrupted and never finished. When asked to recall the tasks, the ones with incomplete tasks remembered twice as well as those who completed the job. The incompleteness of the job keeps it prominent in our short term memory.  And to top it all she found out our human nature has a natural bend to complete a job once we have started. So a cliff hanger is an incomplete story that we want to experience as finished.

My lessons after learning about the Zeigarnik effect

The secret of getting ahead is getting started.

Mark Twain
[Tweet “The secret of getting ahead is getting started. Mark Twain”]

“What else does this craving, and this helplessness, proclaim but that there was once in man a true happiness, of which all that now remains is the empty print and trace? This he tries in vain to fill with everything around him, seeking in things that are not there the help he cannot find in those that are, though none can help, since this infinite abyss can be filled only with an infinite and immutable object; in other words by God himself”

Our longing for God. Our yearning to return to him. The incompleteness we live without him. Our unfinished story waiting for the final chapter written by the original Author.

We ARE incomplete without God – the Zeigarnik effect on the mind and the God effect on our souls.

Had you heard about the Zeigarnik effect? How do you think it affects us spiritually?