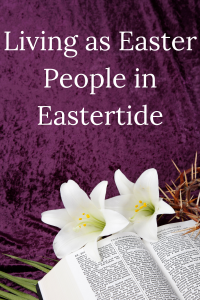 Eastertide is living as Easter people every day, not just on Easter Sunday, but as a way of life. In our local church, we start each worship service these next few weeks with this greeting: Christ is risen! He is risen indeed! Our traditional Easter greeting.  April brings Easter and don't forget Easter isn't celebrating just one day but a full season. In the church calendar, the season of Easter runs for 50 days from sunset on the eve of Easter Day until Pentecost. This year this means we will greet each other from Sunday April 4 until Sunday, May 23. This a seven-week season of the church year is also called Eastertide. Eastertide is the time of new life. We see this reflected as spring bursts with buds, flowers, and nests full of eggs. We hear it in our music. The sun shines longer each day.  My spirit lifts in this light and in the Light of New Life. Extending this season gives us time to rejoice and experience what it means when we say Christ is risen. … END_OF_DOCUMENT_TOKEN_TO_BE_REPLACED

Holy Saturday waits. During Holy Week, we parade and cheer Jesus onward as he entered Jerusalem on Palm Sunday. We broke bread and drank wine on Maundy Thursday.  We stood at the edges in disbelief and grief as he died on the cross on Friday. According to the gospel writers, Jesus died at three o’clock in the afternoon. The Jewish sabbath began at six. This meant for the family and friends of Jesus, time was not on their side. The clock was ticking, and the body of Jesus needed to be buried quickly. As evening approached, there came a rich man from Arimathea, named Joseph, who had himself become a disciple of Jesus. Going to Pilate, he asked for Jesus’ body, and Pilate ordered that it be given to him. Joseph took the body, wrapped it in a clean linen cloth, and placed it in his own new tomb that he had cut out of the rock. He rolled a big stone in front of the entrance to the tomb and went away. (Matthew 27:57-60) Time stood still between Jesus' death and his … END_OF_DOCUMENT_TOKEN_TO_BE_REPLACED

Do you have an evening routine? Routines help us by saving brain power and time in decision making, give our day structure and either starts my day with healthier habits or helps me unwind at bedtime. Kendra over at the Lazy Genius wrote a great blog post about the value of routines and it is well worth your time reading her wisdom.  Much to ponder in that article. Emily Freeman in her latest podcast discusses evening routines and her words made me assess one of the essential tasks I do before falling asleep each night.  I ask myself four evening routine questions. Four Evening Routine Questions Previously I rotated between three questions at night to review the day with God. I wrote about this on this post.  My routine is based on the ancient prayer practice called the Daily Examen. This prayer is a prayerful reflection on the events of the day in order to detect God’s presence and discern his direction. With this prayer we clearly discover God’s blessing in our … END_OF_DOCUMENT_TOKEN_TO_BE_REPLACED

A round up is a collection of interesting reading, resources and links one person gathers, then shares in a podcast or blog post. Rounds ups are like treasure chests – you find rich nuggets of wisdom and inspiration. You can skim all the ideas and choose which ones to fall down the bottomless rabbit trail of fun info. After the past few weeks this blog tended towards a pretty serious tone so it's time to find joy! Here you go: Round Up of Interesting New Words I am such a word nerd. ( : The perfect word for a pandemic: Waldeinsamkeit - a German word that refers to the feeling one has while being alone in the woods, usually a sublime or spiritual one. Chinwag – is British for chat.  I love having a chinwag here on the blog each week with you. Gelid – Latin for icy and extremely cold.  I am glad the gelid winter is almost over. Limerence - this word just plain sounds cool.  It means “obsessive infatuation with someone, usually accompanied by delusions of … END_OF_DOCUMENT_TOKEN_TO_BE_REPLACED

Ready for Ash Wednesday and Lent? Today is Shrove Tuesday which I featured on the blog last year and tomorrow is Ash Wednesday. This solemn service includes confession and reconciliation and the use of ashes to form a cross on each forehead. “From dust you came and from dust you will return.” Genesis 3: 19 The symbolism of ashes stirs my heart each year and feels like the threshold on our walk to Gethsemane and the Resurrection. I stand in the doorway between the seasons and pause to ponder God's faithfulness and forgiveness and to pray and praise his grace and love. The sign of the cross on our forehead with ashes recalls our baptism, and reminds us that in both life and life beyond life we belong to God; we are “marked as Christ’s own forever.” In our parish and many others, the ashes are made by burning palm branches from the previous Palm Sunday. Throughout the Bible ashes represent repentance and asking God for mercy and forgiveness. For … END_OF_DOCUMENT_TOKEN_TO_BE_REPLACED

Are you a spiritual marathoner? I am a not a runner.  Yes, I do walk for exercise but run?  No way! If I did try running, I am sure I wouldn't go far before gasping for air or collapsing. My legs and my heart aches with the thought of running a marathon. Yet, in many ways we are all running a collective marathon right now. It has almost been a year we have endured this pandemic – a life event we didn't choose, can't control, and we are not sure when it will be over. We are tired. We desperately want to get back to how we used to do things. We are emotionally and spiritually exhausted. I said this to others serving in the church and friends of faith and all agreed. There is a bone weary, soul numbing fatigue. "Hitting the wall" is a phrase marathoners use when every step feels like you are wading through concrete and you begin to doubt if you will ever see the finish line. In reality this feeling of defeat and discouragement usually arrives at about mile 20 of … END_OF_DOCUMENT_TOKEN_TO_BE_REPLACED

Who shapes your faith? Deep in your most inward core of your being, the center closest to God, the Creator, who are you?  Who influenced how you live from that tender place? What you believe. How you think. How you perceive others, the world, and even yourself. Reflecting on who shaped/shapes us (both past and present tense) is a powerful question revealing insights into ourselves and why we think and act when we are on autopilot. That default mode leads many of our daily decisions and in the long run, forms the direction of our life. This also affect our intentional actions but to be honest, often we exist quite mindlessly. Many of us will note our parents and grandparents as part of this list. Maybe a significant teacher or mentor. Sometimes an important event, ah-ha moment, or momentous situation contributed to our bent. I know even my silent still times with God formed and continues to form my heart. Other Writers Shape our Faith Writers, both current and … END_OF_DOCUMENT_TOKEN_TO_BE_REPLACED

Go is my word of the year.  I wrote about this practice last week but today want to expand on how this word will guide me in 2021. At first I thought this was too simplistic, but I kept hearing it. Feeling its energy.  This word invites me forward with hope, liveliness, and power. GO symbolizes a new spiritual practice for me. As I prayed about choosing a word for the year, God (interesting to pay attention to the first two letters in the word GOD) asked me to watch for his grace.  To daily watch for his touch, gifts, presence throughout the day.  Grace Observed. In essence this mean to ask myself: Where am I seeing grace each day? Grace Observed draws my eyes from my ego, self-pity, and what I don't have or what I have lost and helps me see grace in every place. To appreciate all that God provides - visible and invisible. Forgotten, then remembered. Cherished instead of neglected. I have had fun playing with this word – another confirmation of this power in this word and … END_OF_DOCUMENT_TOKEN_TO_BE_REPLACED