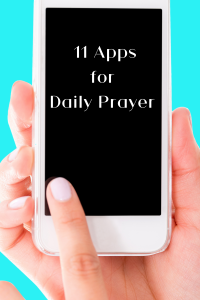 How do you start your day?  Me?  Coffee, walking, and prayer. All with the help of technology. My coffee is ready when I get up in the morning since I use the timer feature on the coffee maker. What a great way to wake up with the delightful smell of coffee in the air. I am a house walker, walking throughout my house at a fast pace, up and down the stairs, listening to podcasts and working out with the goal of 50 minutes and 6000 steps to start the day.  I love my Fitbit for tracking and try to close all three fitness rings on my Apple Watch by the end of the day. I also practice morning prayer and use several apps on my phone to help me slow down, quiet my spirit and thoughts, and hear God in new ways.  Technology can be a distractions sometimes but also a help in deepening prayer. Below are some great suggestions to try. I think all use either Apple or android and most links go directly to the app page. You will have to go to your app store to download. … END_OF_DOCUMENT_TOKEN_TO_BE_REPLACED 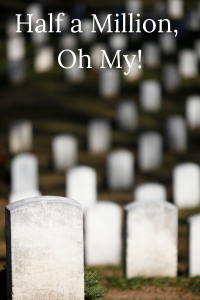 Half a million dead. This is the number fellow Americans who have died in the Covid pandemic.  In one year – 500,000 lives gone. This grim statistic stabbed my heart. I can't even comprehend this staggering number of a half of million. I read this is more that the entire population of the city of Atlanta.  There are 525,600 minutes in a year. That’s one Covid death per minute, for almost an entire year. National Geographic shared these and other graphics about this tragedy. In 2020, the U.S. saw a more than 15 percent increase in deaths over the prior year, the highest year-on-year rise in deaths across the U.S. since 1918, which experienced both a global flu epidemic and the First World War. A line of 500,000 caskets, laid end to end, would stretch for 645 miles. Those coffins would reach from New York City to Indianapolis. It would take a wall almost nine times the length of the Vietnam Veterans Memorial in Washington, D.C., to list the … END_OF_DOCUMENT_TOKEN_TO_BE_REPLACED 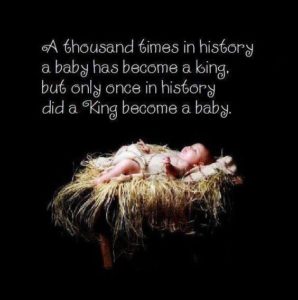 Are you willing...To forget what you have done for other people, and to remember what other people have done for you?To ignore what the world owes you, and to think what you owe the world?To put your rights in the background, and your duties in the middle distance and your changes to do a little more than your duty in the foreground?To see the that men and women are just as real as you are, and try to look behind their faces to their hearts, hungry for joy?To own up to the fact that probably the only good reason for your existence is not what you are going  to get out of life, but what you are going to give to life?To close your book of complaints against the management of the universe, and look around you for a place where you can sow a few seeds of happiness?Are you willing to do these things even for a day? Then you can keep Christmas. Are you willing..To stoop down and consider the needs and desires of little children?To remember the weakness and loneliness of people … END_OF_DOCUMENT_TOKEN_TO_BE_REPLACED 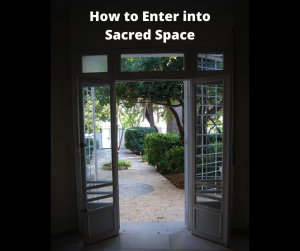 How do you enter into sacred space? Barge right in? Loudly bang on the door, demanding your right to cross the threshold? Abruptly sit down, run down your list of prayers, then check this action off your to-do list? Sounds horrible, doesn't it? Not very honorable of God. Yet lately I have become aware of my first moments as I move into my time with God. Rushed. Pressured. Too much hustle and not enough holy. This year I am exploring and pondering sacred space – internal and external.  You can read about my theme for the year here. What I Learned During my Online Retreat I experienced God in a new way a few weeks ago when I participated in Becky Eldredge's  Busy Person's Online Retreat. I spent longer morning time in prayer, Bible reading, and journaling and finished each afternoon on Zoom with a spiritual director.  One of the best lessons I learned was how I entered into sacred space of prayer and journaling impacted how I heard God and felt his … END_OF_DOCUMENT_TOKEN_TO_BE_REPLACED 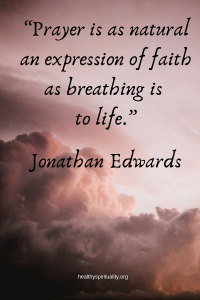 Hit the pause button! For just a minute in the midst of your hurry-scurry of reading blog posts, responding to emails and juggling your to-do list, stop.         Take a deep breath. Breath in – feeling the external air enter your lungs. Breath out – exhaling the internal. Air inward. Air outward. Breathing is so intuitive and intimate. Both conscious and unconscious. Lifegiving and life transformational. Breathing and praying share many of the same characteristics. Breath God in. Breath ego, worry, fear out. God surrounds us like air – invisible, life-giving, all around and within. We are like fish in the sea wondering what water really is. This powerful force sustaining and nurturing us on our journey. Breath Prayers The Bibles teaches us to “Pray without ceasing.” (1 Thessalonians 5:17)   How do we do this? One type of prayer that has helped Christians across the ages to fulfill this command is breath … END_OF_DOCUMENT_TOKEN_TO_BE_REPLACED 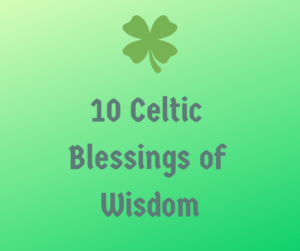 In honor of my upcoming pilgrimage to Ireland, I have been collecting Celtic blessings. Here are a few for you today: A best friend is like a four leaf clover: hard to find and lucky to have.  Anonymous ****** A wish that every day for you will be happy from the start and may you always have good luck and a song within your heart.  Irish Blessing ****** Always remember to forget, the friends that proved untrue. But never forget to remember those that have stuck by you!  Irish proverb ****** You've got to do your own growing, no matter how tall your grandfather was!  Irish proverb ****** Do not resent growing old. Many are denied the privilege.  Irish proverb ****** Tis better to buy a small bouquet and give to your friend this very day, Than a bushel of roses white and red to lay on his coffin after he's dead.  Irish proverb ****** May the hinges of our friendship never grow rusty. Irish Proverb ****** It's no use carrying an umbrella if your shoes are … END_OF_DOCUMENT_TOKEN_TO_BE_REPLACED 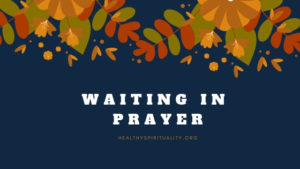 Waiting for a prayer to be answered is hard. I have several prayers I have been hounding God about for years. I haven't heard no. I haven't seen the results I told him I wanted. I will be honest I have more than suggested something he may want to take care of. Now, please, Lord! We wait in prayer and often don't get the answer we wanted. Sometimes while waiting in prayer, the answer appears in an unexpected way. Or even better than ever imagined blessings. But my pile of "someday" prayers simmers in my heart. Waiting in Prayer I don't have tricks or techniques to help in the time of waiting but have been exploring and talking with God about this phenomenon we all experience.  Perhaps God uses this time like weight-training but spelled differently -wait-training. Here are some gems to consider: But if we hope for what we do not see, we wait for it with patience. – Romans 8:25 Patience?  Sigh. Waiting in prayer does teach us patience or at least attempts to foster … END_OF_DOCUMENT_TOKEN_TO_BE_REPLACED

In September we have been looking how to pray when it is difficult. This is all part of the Year of Prayer here on Healthy Spirituality.  You may find the previous posts about praying during difficult times  here and here. I love chewing on great bits of wisdom found in the wise words from others. Here are 10 thought-provoking and inspirational quotes about prayer that I hope will help you in hard times. Find one or two of your favorites and tug them into your journal and/or Bible. May these words bubble up and find you again just when you need them. Our prayers may be awkward. Our attempts may be feeble. But since the power of prayer is in the one who hears it and not in the one who says it, our prayers do make a difference"  Max Lucado ****** Prayer is not asking. Prayer is putting oneself in the hands of God, at His disposition, and listening to His voice in the depth of our hearts.  Mother Teresa ****** I have been driven many times upon my knees by the overwhelming … END_OF_DOCUMENT_TOKEN_TO_BE_REPLACED